Clive to the rescue 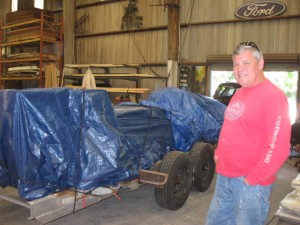 Clive to the rescue. Again.

I can’t say enough good things about my friend, Clive Dunne.  Not only do I know I can call him and ask him any DIY question, I can even call him to help me get all of my stuff from FX Studios to….who knows where.

When we got to FX, I wasn’t prepared for what a 23’ trailer professionally packed and tarped and bungee’d would look like. And, boy, was that a sight. Lots of stuff, beautifully gift-wrapped.

When we got to FX, via Clive’s trusty 1996 Jeep Cherokee, they were working on the trailer hitch. It gave Clive a chance to see just what pros these guys at FX Studios are. And I was in heaven. An entourage of men with tool belts. What a vision to behold! And they knew how to use those tools. (When you’re in the Airstream adventure I’m in, sexual innuendos do not apply!) 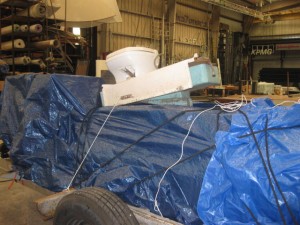 An hour later, we departed, looking like the Beverly Hillbillies. Because the guys forgot to pack the toilet, we had to tie it on the outside. Classy, don’t you think? 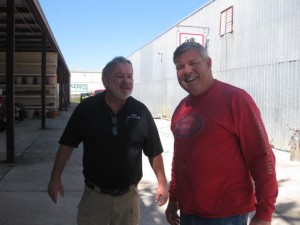 En route, Clive made a very important call to his friend, Charlie Bell, who has an RV storage lot attached to Bell Equipment Rental on Orange Avenue in Orlando (shameless plug here). He agreed to let us haul my goods to his lot.

Here Clive took the tires off the trailer, put the trailer up on blocks, then picked me up to head out to Hidden River RV Park to give Amelia a new pair of shoes. Actually, two new pair since she has two tires per side.

Bless his heart. Can you believe Clive put the new tires on Amelia and then went back to Charlie Bell’s to put the old tires on the supply trailer?

And he’s still speaking to me.

In fact, he’s riding shot gun when we spring Amelia from Hidden River.